Twitter is the social network that popularized the #hashtag, so it’s no surprise that these play such an important role in tweets. Hashtags are mainly used in Twitter in order to:


So, having a number of hashtags in any of your tweets will increase the visibility of your post on certain occasions. For example, if you write a post about a vacation in Santorini, having the hashtag #Santorini instead of just typing Santorini will mean that the potential viewers of your tweet will be anyone who clicks the #Santorini hashtag. This hashtag will be present in numerous posts, some of those by Twitter users with many followers (“influencers”). Many of their followers who will find interesting their #Santorini tweet are quite likely to click the hashtag to see what else they can find on this topic. So, your post will also be listed along, thus expanding your visibility to a new audience, beyond your followers!

Example 1 (Tweet without the hashtag): I loved our Santorini holiday this year, check out our amazing photo tour of the island twt.li/photo1

Example 2 (Tweet with basic hashtag): I loved our #Santorini #holiday this year, check out our amazing #phototour of the island twt.li/photo1

Example 3 (Tweet enhanced with more hashtags): I loved our #Santorini #holiday this year, check out our amazing #phototour of the island twt.li/photo1 #greece #greekisland #picturesque

An important note is not to overdo with hashtags because it could make your post hard to read. Use two to four hashtags at most. 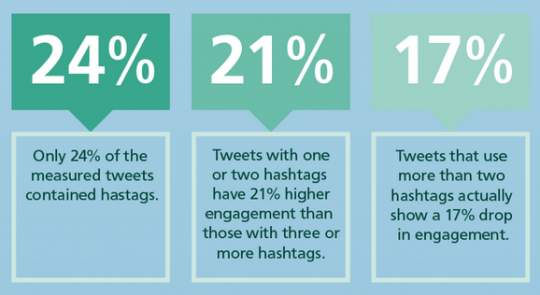 The one caveat to hashtags on Twitter might come for those brands looking to gain clicks on Twitter ads. In the case of advertisements, Twitter found that tweets without a # or @-mention generate 23% more clicks. The reason? Hashtags and @-mentions give people more places to click inside a tweet instead of focusing solely on a call-to-action.

However, my opinion on this is to only trouble you if you plan to use your tweet as an Ad. In any other case, the benefits of the much higher reach and engagement will most likely drive to much better performance for your tweets.

How to find the best performing hashtags?