We all follow at least some brands on social media. Either to keep up with their news or be entertained. We have our favorite handpicked brands that just take it up a notch and we don’t miss anything from them.

Why is that? What makes them so compelling that makes us and more of their fans seek their posts, engage with them and ultimately stay loyal to them?

That’s what we are going to explore in this article along with what can small and medium businesses learn from them and maybe adapt their tactics into their own social media strategy.

Social media is one of the core marketing channels of Netflix. They use them to their full extent, by using specific features and engaging, targeted content to reach as much audience as possible in the right way.

This alone not only helps them reach a wider audience and get more engagement, but it also allows them to promote to each country the series that would be most suitable.

For example, if Peaky Blinders is more popular in the UK than House of Cards, they can prioritize promoting the first over the latter in that country.

On top of that, they also promote funny but relevant content, in a meme-style format which helps drive more engagement. Usually, they feature a scene from one of their series. That way when one of your friends likes it and you see a certain mention a couple of times, you’d start wondering what’s going on about that series and you’d be inclined to check it out.

Me on Monday vs. Me by Wednesday pic.twitter.com/u7X8J4LJv3

Lastly, Netflix usually replies to a few comments in their posts either with a catchy/funny phrase or with a relevant gif from one of their series. This action shows to their audience that their comments are being read and might also elicit a response from the company.

So, what can small and medium businesses learn from Netflix’s social media strategy?

If Netflix with tens of millions of followers can respond to some of their comments, so can you. In every post of yours, make sure to reply to 1-2 of the comments with something insightful, a gif an emoji (not all at once though!).

Your audience will appreciate it and next time they will be more inclined to comment. Try it and see how it works for you.

Also, if your business serves multiple locations or countries, you might benefit from a Global Page.

The first time I saw General Electric’s (GE) social media I couldn’t believe what I was seeing. A major company in an industry that many would classify as “boring” and “not a good fit for social media” had managed to create highly engaging content and amass a big audience.

Not only do they invest in their content to make it appealing to social media, but they also post behind-the-scenes photos on Instagram from their factories and manufacturing process.

At first, you might think that few people would find this interesting, but more than half of consumers want to know what they buy, where their products come from, and if they are produced in an ethical way.

Photos from behind-the-scenes can give them a clearer view of how ethical the product production process is and who are the people making the products they enjoy, or what makes a good material for their kitchen appliances.

Apart from the photos, a special kind of video format is popular on their social media.

In the example above, you can watch an educational video talking about a tunnel and its traffic implications which is important to anyone who drives and helps increase awareness.

Also, there are captions and no voice in the video, which makes it more probable to grab users’ attention since by default videos play automatically on FB, but without voice. If the first 1-2 sentences grab a user, they will stick around for the rest of the video.

If GE can create interesting content while being in a relatively dull industry, you can be pretty sure your business can do that too.

For starters, you could start by posting photos or short videos from behind the scenes.

If you create your own products you showcase the production line, where do you get your materials from, what’s processed and who are the people who make your products.

If you are a service business you could show something you are making for a client, explaining the process of how you do certain activities, like starting with a client, etc.

Don’t worry about competitors, if they want to copy you, they will do it whether you post it on social media or not. Regardless, you wouldn’t be able to share enough information in such a short time span for them to copy you.

On the other hand, your prospective customers will know what goes on behind the scenes and who are the faces of your company, which will make them more likely to buy from you.

I don’t know how it started or when exactly, but at some point, the famous fast-food hamburger chain started “roasting” people on Twitter and especially their rival McDonald’s.

For those of you unfamiliar with the term “roasting” it means criticizing without holding anything back. In simple terms, they had some great comebacks at snarky comments made at them or other comments mentioning their rivals.

Now, of course, no one would advocate companies to start bashing their rivals or other users openly on social media. However, it’s an example of how a big corporation found its voice on social media, made it different, and generated a ton of PR buzz around it.

If big companies start dropping the all too serious replies on social media and maybe start being a little bit more informal or personal, yet in a professional way, it should generate more engagement and reach for them on Facebook or Twitter.

Wendy’s is not the only one though. More and more brands are starting to become more casual on social media and occasionally try to craft a clever tweet on a trending topic bridging it with their brand.

You know, in terms of toilet paper, saying you’re as soft as Charmin is a good thing. In basketball? Not so much. #tweetfromtheseat

This kind of activity though usually needs a certain type of talent. So, for SMBs you could either hire an intern, like this train network did, to start working your social media channels in that direction (after you approve the posts at first), or if you have the talent you could start tweeting as your brand on trending topics.

Trending topics can be found on the left of Twitter for your country and you can check daily to see if there are any relevant topics with your brand. 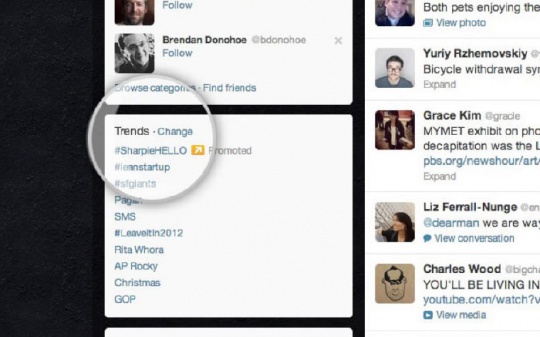 Just be careful not to be promotional with your brand, but rather casual, otherwise, it might backfire.

To summarize, I wanted this article to inspire small and medium businesses to be more active on social media and in a different, more engaging way.

It can be difficult and time-consuming when you don’t know where to start, but I hope that these examples from these brands will prove that you could do at least one of them with just 15 minutes per day, or by hiring an intern which would give them some experience and it could buff up your brand awareness.

Don’t forget that these brands have a huge following, so whatever they post will be instantly read or watched by thousands of people. For SMBs it might be good to allocate a very small budget (even $5 could do it) behind important posts or those that perform better than others, so you can amplify them.

I’d be happy to discuss your thoughts on the above in the comments section below.

Alex Chaidaroglou is the director and co-founder of the most accurate price monitoring software for brands and e-commerce stores, Altosight. Brands can monitor their retailers for MAP compliance or competing products and e-commerce stores their competitors. He has 6 years of experience in digital marketing.