We have seen several battles between the key players in the technology industry, as they compete for customers. Well, Silicon Valley welcomes a good battle! If you have been following the latest trends in social media space, then you are aware of what has been happening between Instagram and Snapchat. Yes, the Instagram stories and Snapchat stories are two social media features that have been in the headlines. Instagram and Snapchat have been trying to impress the users, and the efforts have somehow turned to be a battle. But where did all this start and where is it heading?

Moved by this, Facebook (Instagram Owners) showed interest in purchasing Snapchat. However, this did not see the days light. Some years later, a feature called Instagram stories was introduced. It was pretty obvious that this would be the beginning of a battle between Instagram and Snapchat. The Business owners and Social media influencers now have an option between Snapchat and Instagram stories. So, what has been the impact of this on Snapchat? Let’s see.

Instagram Stories Proved to be Superior to What Snapchat Offered

A report published by TechCrunch showed that Snapchat stories view decreased by close to 40%. Even worse, the number of stories posted on Snapchat showed zero growth. A year after its launch, Instagram stories flourished to become one of the best visual communication features. From the statistics, it’s clear that Snapchat was experiencing the worst moments. Meanwhile, Instagram was gaining more views.

The number of views increased after the introduction of Instagram stories. It was already clear that this was the feature that would make Instagram popular among top social media influencers. After six months, Instagram stories had gained over 150 million daily users. This was actually close to the total number of users, who were using the Snapchat entire app.

Several statistical data is available showing that Snapchat has lost to Instagram stories. According to Google Trends, in the past 12 months, Instagram stories had more searches. See the screenshot below. 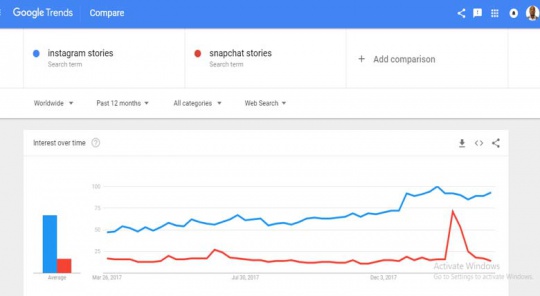 To begin with, marketers are always after numbers. They are attracted to a larger audience that promises potential for growth. Obvious, with the launch of Instagram stories, a time had come for them to dump the losing Snapchat stories. So were the top social media influencers. In fact, if you like it, Marketers were to a large extent encouraged to switch to Instagram stories by the influencers.

The top social media influencers post on platforms and channels that offer them the best growth opportunities. They are looking for a place where they will maximize engagements and grow their following. On the other side, for a struggling business trying to strategize social media marketing, the shift is significant. Of course, there is no brand that would like to invest millions of dollars in social media platform that is “dead”. As an influencer or marketer, you will not waste your time and energy on a platform that is not rewarding.

Studies have shown that influencers and marketers are posting more on Instagram stories. MediaKix, an influencer agency carried out a study that was targeting influencers and business owners. In their study, they sought to understand the habits of social media top influencers. The study found out that:

Business and influencers are looking for numbers and engagements

Well, whichever way you would like to look at it, it is easier to engage more audience since that is where the prospects are higher. This is the main reason why we see that businesses and top influencers choose to engage via Instagram stories. This is because the number of users grew more rapidly compared to Snapchat stories. Earlier, we indicated that Snapchat stories had registered zero growth at some point.

Based on the above facts, I believe that Instagram stories are still the most crucial component when it comes to choosing companies social media strategy. According to Fortune.com, More than 50% of businesses using Instagram produced an Instagram story. One out of five organic Instagram stories produced generated a direct message from the followers.

Therefore, this shows that Instagram stories offer high chances of getting customer attention. This justifies the strategic positioning of Instagram stories to be the top choice for the marketers and influencers.

There are several key influencers who have reported inactivity in their Snapchat account. These have opted to use Instagram stories compared to Snapchat stories. Here are some key notable cases.

What is shocking is that he could not hold on to Snapchat stories even after being awarded the 2016 “Snapchatter of the year”. The 25-year-old was at some point approached by top brands like Coca-Cola and Zillow to create some content on their Snapchat accounts. However, after one and half years, his Snapchat account is not as active as it was in the earlier years. In fact, in his interview with CNBC he says that on noticing the declined viewership, he had to focus on where there was more audience.

Sarena is popular for the Women In Tech initiative. She started off well with Snapchat stories. In her account, she shared stories of women succeeding in technology ventures. She later had to expand to Instagram. Note that Sarena is one of the top Snapchat influencers since she clinched the 2017 shorty Awards for Best Snapchat Account. Interviewed, she stated that Instagram stories introduced dilemma for her business. Therefore, she had to make the shift, and she is now using Instagram more than she does with Snap. This shows the effects of Instagram and Snapchat supremacy battles.

Alex, a UK based fitness influencer indicates that he ditched Snapchat since Instagram had come up with some latest features. In fact, this justification has been made by several other users. For instance, the addition of live video that allowed users to offer external links led to increased fun base for Alex. Therefore, he has started posting only his Instagram stories account. Further, Alex indicates that he has seen his friends leave Snapchat for Instagram for the same reasons.

Snapchat Has registered Declined Earnings as a Result

There is nothing worse than losing income to your competitor. This is exactly what happened to Snapchat. The financial reports released recently, show a major decline in their income. A report published on Reuters.com indicates that Snapchat might not be able to keep up with the growing face of Instagram competition. The stock price has also gone down leading to investors becoming worried after the recent reduction in share price.

The decline in the number of users is a major reason why Snapchat has seen a decline in earnings. Of course, businesses that were using Snapchat were a major source of income for the company. Major brands are shifting to Instagram since there is a higher potential for reaching more followers.

This means that Instagram will continue to experience more earnings from advertisers. We cannot ignore the significant role played by influencers. These encourage more people to open the Instagram accounts. For Snapchat, it’s worse since the influencers carry away followers to Instagram. Therefore, unless Snapchat commits to meeting the expectations from the influencers, they will definitely continue to lose the battle.

Recently, the company had to restructure the application so as to beat the competition. According to Snapchat, they hope that the re-design will help the company regain their followers and hopefully attract more followers. If all goes the well, the investors also hope that the company will be able to perform well in stocks.

Both Instagram and Snapchat are important for business social media presence. However, the features are what determine which platform is better than the other one. Snapchat started off very well but lost it when they failed to innovate early enough. For a social media channel to succeed, it is important they ensure they are ahead of the potential competitors. This is what has so far helped Instagram, and therefore, success lies ahead for them. However, we can only speculate since there are several forthcoming upgrades that Snapchat has promised to roll out.

Therefore, the battle between Instagram and Snapchat is far from ending. This is because as Snapchat goes back to the drawing board, Instagram and possibly other channels are also seeking to improve their features. By so doing, the best will attract more social media users. The major key players who include businesses and influencers are also following the wave. As illustrated above, businesses will follow where the audience is. The channel that registers more followers will ultimately attract influencers and businesses. The question that remains on most people’s mind is Will Snapchat manage to attract back their original users? Well, we can only wait and see where Snapchat will finally end up.

George is a co-founder of Mentionlytics supervising Financial Planning and Analysis and our Cloud Architecture. He is an Associate Professor on Emerging Technologies and Marketing Innovation. His interests include Cloud Computing, Web Applications and Internet of Things. View all posts by George Mastorakis →