We are all excited for the biggest European final football game with hundreds of millions of supporters worldwide. Champions League final showdown clash between Juventus and Real Madrid is on the line Saturday at 19:45 p.m. GMT in Millennium Stadium of Wales with two of the stronger and historical football clubs worldwide fighting for the most wanted Cup in Europe.

This is Real Madrid’s 15th Champions League final appearance, which is an all-time record, but the most remarkable is that won 11 of them and now wishes to remain champion for 12th time. On the other hand, Juventus, the Italian giants counts the ninth appearance at the finals and will fight hard to come back to the highest stand of European trophies. Both teams arrive after qualifying against great teams, Juventus against Barcelona and Monaco, while Real Madrid against FC Bayern Munich and Atletico Madrid. 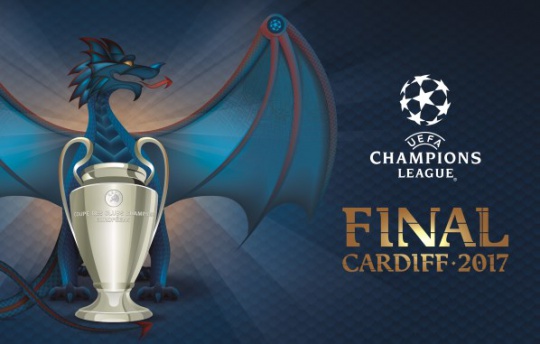 Odds are changing rapidly and no one can predict the final winner who will bring happiness to his team’s friends and supporters. As fans of Champions League in Mentionlytics, we can not resist looking at the performance of two teams during the week before the big match in the web and social media in order to find out the Champions League winner in the online world.

Taking as keywords RealMadrid, Juventus, Final2017, Champions League, adding their official social media as owned media and use Mentionlytics as our web & social media monitoring tool for the past week, we have the outcome of the battle in the digital world.

Highlights of the Final in the web and social media… 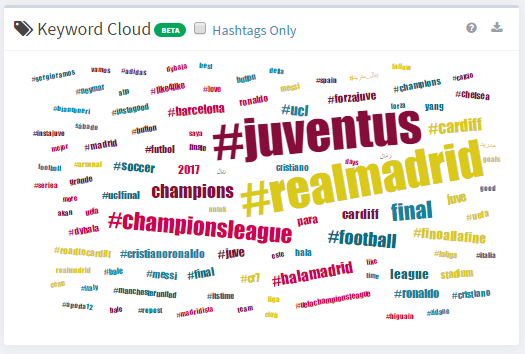 One thing is for sure! This match is a hot topic worldwide with hundreds of millions of mentions. Using our new feature “keyword cloud” for their hashtags we managed to create an overall view. We only then realized that the result between the two teams, two days before the match, is a draw!  So, if you are a real fun, keep posting to support your team for the big final in Cardiff.

After the match, we will come back again with the final winner of champions league in social media. So, keep tuned and get ready for the final with cold beers and pizza! We wish a great final and good luck to both teams! #halamadrid #forzajuve

Are you gathering data about your brand from the Web and Social Media?

If not, you can do it instantly with Mentionlytics. Just head to https://www.mentionlytics.com/free-brand-monitoring/ and enter your brand's name to get started for free. You will be amazed by what you could find out about your brand that you never knew it existed.

Seeing this data is possible by performing simple search on Google or Social Media, but it's really hard to make sense of it, by looking it sparingly in this way. This is where Social Media Monitoring tools come into play. You can use a tool like this to automatically gather all this data for you everyday, analyze it, and give you useful insights that you can extremely helpful for your brand.

What's more, you can also get access to the same data for your competitors. Also, you can monitor keywords and phrases related to your industry, and this way you can get very useful consumer insights in real-time. These insights could cost hundreds of dollars to acquire from a research agency.

Kostas is a BI Analyst at Mentionlytics gaining insights from data. He is a Ph.D. Candidate and he loves data analytics and innovation. View all posts by Kostas →